Ice sculptures on Statte and Sawe

A bit of snow, a winter sun and freezing temperatures the last few days... That's all that's needed to make me descend from the High Fens into a fairytale landscape of water and ice. 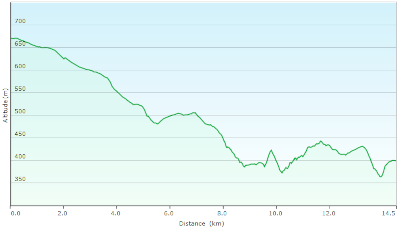 It's a dry and sunny day with temperatures well below freezing point. Last night it snowed a little in Verviers. So, on the High Fens, situated more than 400 meters higher, it must have snowed even more. But it will also be a lot colder there. Don't hesitate! Put on some warm clothes, prepare a lunch box, fill a thermos with hot coffee and don't forget the nut mix. At 9.40 am I'm basking in the morning sun at the train station of Verviers. Five minutes later I'm on bus 390 towards Rocherath. At 10.15 am I arrive at the Baraque Michel and I start my walk. In pre-Corona times that would have been unthinkable for me. I would first have stepped into the tavern to have a cup of coffee. But now all the taverns, cafés and restaurants are closed, and I found out that it's possible to start a walk without having a coffee shot first. Or how a virus teaches us that what used to be normal, in fact was only pure indulgence...

The path that guides me into the fens is the centuries-old Vêcquée. I noticed that the GR-trails that cross the High Fens don't include this path, or only cross it at the Hoëgne near Hockai. Too straight-lined and not enough variation? May well be, but this Vêcquée is so much more than a path. The prince-bishops of Liège used it, seated in their litters or in their oxcarts, to travel through this barren landscape, on their way to the abbeys of Malmedy and Stavelot. Here, in this wide open plain, an icy wind makes the temperatures drop even more. Would the prince-bishops have known that they had to dress in layers? The "Croix des Fiancés" (Lovers Cross) perfectly illustrates how dangerous it can be here in winter. 24-year-old Marie Solheid knew this region between Jalhay where she lived, and Xhoffraix where her parents lived. She knew the way to go, and she was well aware of the dangers the weather could represent. And yet, she and her fiancé died here in a snowstorm on January 22, 1871. They were only 1.5 kilometres away from the hostel that was already known at the time as the Baraque Michel.

Not far past the cross, I leave the Vêcquée that from 1815 to 1920 also was the border between the Netherlands (later Belgium) and Prussia (later Germany). More straight-lined paths through coniferous woods guide me to the Statte, a small river that starts in these fens, and that is always associated with the Bilisse rock where I'll pass later during the walk. The sinuous trail along the water has clearly been used a lot in these Corona times. In many places it has been changed into a series of mud pools. Fortunately the mud is now hard frozen which makes it a lot easier to walk. However, I have to watch out for hidden ice pools that are extremely slippery. The Statte itself has been transformed into an endless collection of ice plates and ice sculptures with the water gurgling over, between and underneath them. I stop all the time to admire the constantly changing shapes of the ice. In just a few days, nature has put up a magnificent show, and it's done all that completely for free. I'm surprised to meet only a few hikers today. Probably the freezing cold has discouraged many of them. I've visited these places regularly during the last few months, and each time I noticed how many people now have discovered these beautiful hikes. But not when it's freezing minus 10° C...

Enough Statte. I'm heading for another small fen's river, the Sawe. On my way there I pass by the "Cabane des Nutons" where I find a bench under a roof, free of snow and protected from the wind. It's the perfect spot for my picknick and a hot cup of coffee. "Nutons" is the French word for gnomes, "kabouters" in Dutch. Locally they're also called "sotês", but I'll come to that a bit later. A few minutes later, a young couple arrives. They probably had the same idea as me, but upon seeing me, they stop and then go to a stone covered with snow, some 10 meters away, to have their picknick. Corona or not, where I'm sitting, there's ample place for 3, with all respect for the distance rules. I decide to invite them in, an offer they gladly accept.

Along the Sawe, the Statte-scenario is repeated, but in an even more spectacular way. Besides, also without the ice, it always strikes me how the Sawe turns out to be the more impressive and attractive one. Statte and Sawe eventually become one river, but that's not part of this walk.
At a picknick table and the "Pîre à l'Macrâle" (Witches' Stone) I bump into the first white-red GR-signs on this walk. They're from the GR 573 trail. That GR only crosses the Statte and the Sawe. That's a pity, but I can understand. In this region there are so many attractive waterways. As a trail designer you have to make choices.
I follow the GR-signs, heading in the direction of the Bilisse Rock. Along the way I'm offered nice views towards the village of Solwaster. But after less than a kilometre, I again leave the GR-trail to descend to a car parking at the Statte in Chafour, a hamlet of Solwaster. I then again follow the Statte, now upstream, and after 500 meters I also arrive at the Bilisse Rock. Along the way information panels provide some explanations on the "Pire al Marède" and the "Trô d'Sotês", a small cave that is visible high up the rocky slope of the valley. That is where the "sotês" used to live, gnomes who, according to tradition, arrived here in the 5th century with the Vikings. They settled in caves and worked as handymen for the locals in exchange for some food, left to them on flat stones such as the "Pire al Marède".  Nice legends and myths that were told during the long winter evenings around the fire, when there was no television, internet or Netflix. Could that be the reason why the "sotês" are now extinct?

At the Bilisse Rock I again start following the GR signs. Now I'll stick to them until the end of the walk at the Pont de Belleheid. The Bilisse Rock with its almost vertical rock face is an impressive spot. I cross the Statte and follow an ascending path along a small side creek. According to the map these will be the last ice scenes I'll get to see. Passing by the Dolmen of Solwaster (that wasn't a dolmen after all, but an enormous erratic boulder) the trail finally starts descending to the Pont de Belleheid in the Hoëgne valley. I know this part of the trail rather well, but yet it seems different again because of the presence of numerous slippery spots and a last unexpected ice sculpture on a small creek.

A final ascending path provides a shortcut for the asphalted road that gives access to the always busy parking at the river. You should see the drivers gloating behind the steering wheel of their SUVs when they're allowed to drive a few meters through some 20 centimetres deep water... It's probably the only time these useless polluters get close to a situation they were made for (although smaller and much lower cars also cross the water without any problem). What a waste, and what a parking chaos here at the Hoëgne. Arriving at the bus stop above on the traffic road, we see more cars parked in a small side road.
But there is hope. At the bus stop Sart-lez-Spa Roquez I'm not the only one waiting. At least 6 other (younger) hikers turn up to wait for TEC bus 294 that will take us to Verviers in 30 minutes.

The hike described here is 14.5 km long. If that's not enough, you can keep following the GR-signs from the Pont de Belleheid downstream along the Hoëgne to Sart-lez-Spa. At a given moment you'll leave the Hoëgne and will be led to the centre of Sart-lez-Spa. That will add another 6 kilometres to this hike. The same TEC bus 294 stops in Sart-lez-Spa Monument.
I advise you to do this walk in the direction Baraque Michel - Pont de Belleheid. The reason: at the bus stop Roquez near the Pont de Belleheid you'll have a bus at least every hour to get back to Verviers. At the Baraque Michel you'll only have a bus (too) early afternoon or (too) late afternoon.