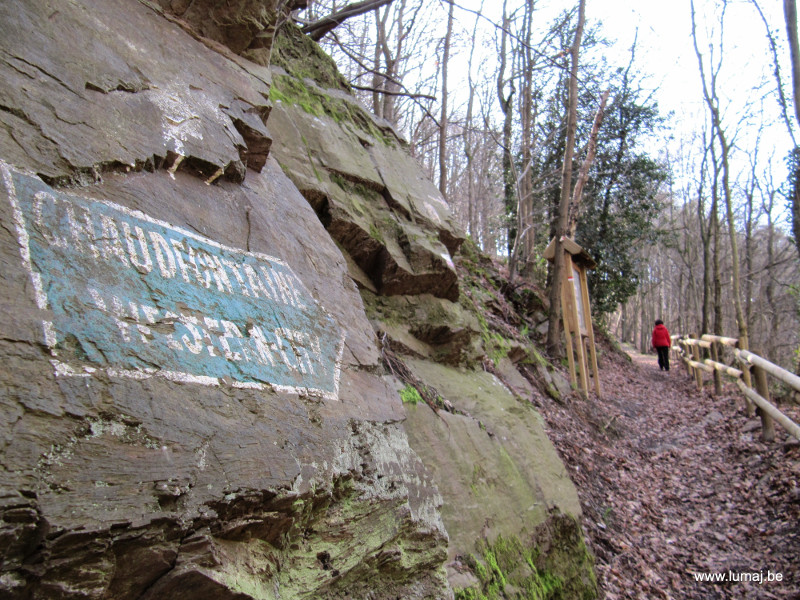 A rather heavy walk (don't underestimate the altitude profile) that follows the Vesdre valley from the outskirts of Liège, all the way up to Nessonvaux. Also a varying hike that illustrates very well how nature is able to recover itself, even after centuries of industrialisation.
And easy to organize since start and finish of the hike are connected by train.

(The track represents the trail as it was shown in January 2021 on grsentiers.org, the official website of the Walloon GR organisation; always consult that website to find out the most recent situation)

The train stations Angleur and Nessonvaux are both situated on the line Liège-Verviers. Getting from Liège to Angleur takes 3 minutes, from Nessonvaux to Liège 19 minutes. The hike also passes close by the train station of Trooz, ideal if you want to shorten the hike by a few kilometers. The diehards can extend the hike up to Pepinster where there is also a train station.
In Angleur and in Pepinster there are trains every hour, on weekdays as well as in the weekends. In Trooz and in Nessonvaux that is only valid on weekdays. In the weekends trains stop there every two hours.

(Check this info always with the websites and apps of the public transport companies - NMBS, De Lijn, Tec... Timetables change regularly and are different on weekdays, weekends, holidays, peak hours...)

French writer Victor Hugo wrote about the valley of the Vesdre that it is "the most beautiful valley in the world, sometimes a ravine, often a garden, always a paradise". Yet, when he wrote this, numerous iron foundries and metal rolling mills, using the water energy, were scattered throughout the valley. They had been there for centuries. During this hike you'll see remnants of this pre-industrial past at the 'Maca' in Basse Henne and at the bizarre building La Fenderie in Trooz.
But that was long before the industrial zinc factories started polluting and poisoning the region until deep in the 20th century. The polluted areas at Angleur and Prayon are still there, but as you'll notice during the hike, nature slowly reclaims its rights. The frail viola calaminaria has become the symbol of the immense power of nature to adapt to even the most harsh and poisonous situations. It's really impressive, especially when you see from high above Angleur how densely populated this region near Liège is. Luckily, also the industry has changed its production methods. In the valley you still see quite some factories and even a huge quarry. Let's hope they've changed for the better and respect the environment.

Along a steep path that was already indicated on the Ferrarismap in 1771, we reach the chapel and the basilica of Chèvremont. The spot used to be a popular pilgrimage destination that attracted the big crowds, especially at the beginning of the 20th century. One day in 1923 some 40 000 people climbed the hill to assist the crowning of a life-size statue of the Virgin Mary. However, some ten years later Chèvremont had to bow for the competition of Banneux which is situated only 15 kilometers away. Finally in 2017 the complex was put up for sale. Since October 2020 the basilica and the abbey are the property of a Brussels construction company. The plan is to accommodate some 70 flats in the former religious buildings.
The Fort de Chaudfontaine is situated close to the Chèvremont pilgrimage spot. That's why the buildings were heavily bombarded during both world wars. Only the white chapel miraculously escaped the destructions. At the beginning of World War I the Fort itself was hit by a German shell that caused a huge explosion in the gunpowder storage room. Some 70 soldiers were killed at once. They're resting in the small military cemetery, next to the entrance of the Fort.
It's quite a contrast with the house-high stacks of the blue and red crates on the premises of the mineral water production facility of Chaudfontaine. Don't miss the wrought iron stairway entry to the train station, immortalized in one of Paul Delvaux's paintings. And have a look at what used to be the hot water springs of the long since disappeared Grand Hôtel des Bains, now hidden behind the ugly SourceOrama building.
(Remark 2019: the small train station of Chaudfontaine was left unused for many years, but is now again an operational stop on the line Liège - Verviers. The railway platforms were completely renewed, and the wrought iron stairway hall was thoroughly restored.)

On a hill ridge you'll pass by the Pont du Diable (the Devil's Bridge). Nobody seems to know the how, why and when of this gate to the Vesdre valley. However, a legend tells us that one day the gate had collapsed. The locals couldn't get to the valley anymore to trade their goods. The devil offered to restore the gate completely in one night, of course in exchange for the soul of the first living creature that would pass under the new bridge. We invite you to find out the rest of the story... Anyway, the devil hasn't shown itself since then, not even to us.

Other GR hikes in the region