Along the Hill (Helle), through the Herzogenwald, up to the High Fens plateau and Botrange, Belgium's highest spot.
The hike takes us from 250 m altitude to 650 m, over a distance of 22 km. We named this hike "The longest ascent in Belgium" in an article that was published in the Op Weg magazine. A classic! 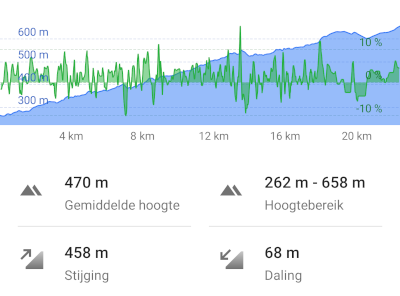 (this track shows the trail as it was shown in January 2021 on grsentiers.org, the website of the Walloon GR organization; always consult that website to see the latest situation)

We camped in Eupen at 1.8 km from the start of this hike. So, we got there on foot.
If you arrive in Eupen by train, you can walk to the start of the hike, but you can also take a bus. The bus stop Eupen-Haas is where the hike starts. Several busses go there.

From where the hike ends we continued to the N676 (Route de Botrange). At the Centre Nature there is a bus stop with the same name. TEC bus 394 will drive you back to Eupen-Haas in about 20 minutes. From there we continued on foot to the camp site.
If you came to Eupen by train, you'd better take bus 390 to Verviers (25 minutes) and from there continue your journey back home by train.

Busses 394 and 390 have a rather limited service schedule. Be sure to know at what time you can take the bus back from the High Fens to Eupen or Verviers. You need enough time for the hike, taking into account that you'll need more time for this hike than you're used to (especially in wet times).

Of course, you can also do this hike in the opposite (descending) direction. Then you'd better arrive by train in Verviers and continue with bus 390 from there (direction Rocherath). Leave the bus at Botrange Naturzentrum.
The hike then ends in Eupen-Haas from where you still have to get to the train station, on foot or by bus.

(Please, always check this info with the websites and apps of the public transportation companies concerned - NMBS/SNCB, De Lijn, Tec... Their time schedules change regularly, and they're different whether you travel on a weekday, weekend, holiday, peak hours...

We did this hike several times and in both directions. No matter the direction, the season or the weather conditions, this will always be one of the most memorable hikes you can do in this country.

It takes a while before we've left the housing quarters of Eupen behind us, but from that moment on, there's only the Hill to keep us company during almost all the hike. 'Die Hill' ('La Helle' in French) starts on the High Fens plateau and ends in Eupen where it flows into the Weser (Vesdre in French), the river we've been following since the start of the GR 573 trail. The Hill is not just a river. During many centuries it has also been a border. In Roman times it was the border between the cities Tongeren and Köln. From the Middle Ages to 1795 the Hill separated the duchies of Limbourg and Luxembourg, and after that it became the border between Prussia and the Netherlands (later Belgium).

On its way down, the Hill flows through the Herzogenwald which covers most of the territory of Eupen. This forest covers the longest slope you can find in Belgium, the passage from the Herve plateau (with altitudes between 200 m and 350 m) and the High Fens (with its highest point at 694 m in Botrange). Between Eupen and Herzogenhügel where the High Fens' plateau starts, we climb from 250 m to 525 m. That sounds impressive (according to Belgian standards), but that ascent stretches out over a distance of more than 13 kilometres. You hardly feel it going up. Nevertheless, as the hike proceeds, you'll start feeling it in your legs.

In the Herzogenwald, the trail mostly follows the Hill very closely. The river makes its way in a rock-covered bedding. The sound of babbling and gushing water is never faraway, an entertaining spectacle for ears and eyes. Until the "Schwarze Brücke" (Black Bridge) the trail follows a wide forest path, but then it varies from hardly visible riverside tracks with lots of tree roots and rocks, to wide and seemingly endless paths. Meanwhile, several creeks, one more turbulent than the other (it rained a lot the last few days and weeks) dump their water in the Hill. Getting lost is difficult, the signposting is quite clear, and if in doubt, just keep close to the Hill. During the hike you won't find any food nor drinks, so be sure to have enough to last for the whole day. However, where the Ternellbach flows into the Hill you can leave the trail and climb to the Ternell Nature House where there's food and drinks. But you'll lose at least one hour of your valuable time. We picnicked at the Hillsperre, a dam on the river where part of the water is diverted into a 1.5 km underground canal to the Getzbach and the Wesertalsperre. After all, the water that comes down from the High Fens is a natural richness for the region, and it is used in every possible way.

After these first 13 kilometres we leave the Herzogenwald at a place called Herzogenhügel. It's where the Spohrbach flows into the Hill, and you'll find a picknick table there. But more importantly this is where we arrive at the High Fens plateau. What makes this place also special is that here in the Hill, and close by in an old quarry, tonalite was found. It's an extremely rare igneous rock in these parts. From here on the landscape completely changes. The thick forest makes room for a slightly undulating plateau, covered with fen grasses and a few trees. The heavy rains these last few days and weeks have painted the landscape in a fresh green colour, making it look much easier to walk than the forest paths we had until now. But looks can be deceiving. The fens are an enormous sponge that holds the water and makes it very difficult to get through, unless you follow the few paths that cross the fens. GR 573 follows that kind of path through the lower fen, along the Hill. Now and then wooden footbridges help us to advance, but most of the time it's searching and groping over tree trunks and grass polls to keep our feet dry. It took us over 2 hours to walk the 4 kilometres between Herzogenhügel and the Pont Marie-Anne Libert. Maybe you'll be more lucky in dryer times, but it certainly wasn't easy for us. Near Herzogenhügel you can also follow an alternative path that is much easier to walk, but if you really want to get a good idea of what the High Fens are, you follow the main trail. Anyway, for us it was an unforgettable experience. It confirms the stories about the barren and treacherous landscape the High Fens always were. And yet, as a protected nature reserve, it's also a unique and essential biotope that provides the drinking water for a large part of our population.

At the Pont Marie-Anne Libert we cross the Hill for the last time. The trail says goodbye to the river, and soon we walk at an altitude above 600 m. Now we're really in the "High" Fens. Wide straight-lined grass and gravel paths lead us over the vast plateau. As far as we can see there's only the from green to brown, yellow and grey evolving plains, here and there interrupted by dark green stretches of wood. All the way from Eupen we saw only one hiker doing it in the same direction as we did. In the opposite direction we saw quite a few hikers. They did it the more easy way.

Finally, we reached the GR pole near Botrange which indicated the end of our hike. The Nature Centre of Botrange is only a few hundred meters away. It's where we find the bus stop to get us back to Eupen.