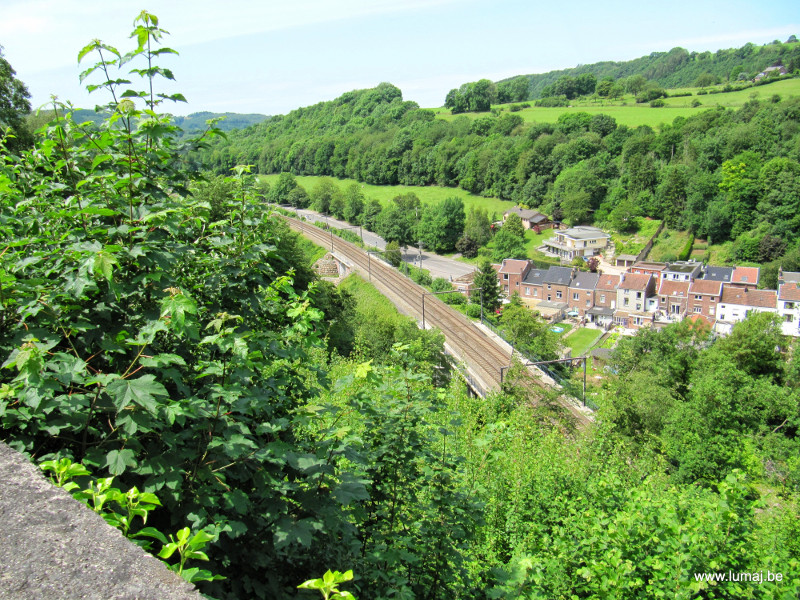 The trail goes on, following the Vesdre valley. A quiet nature walk without anything spectacular.
Combining the hike with the connecting trail to the centre of Verviers, this hike can be perfectly organized as a train hike. 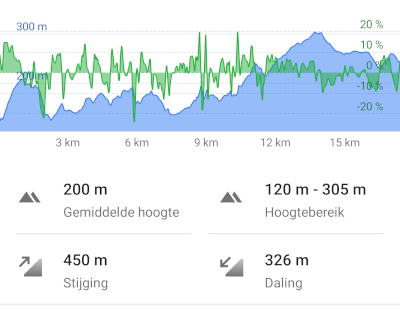 (this track represents the trail as it was shown in January 2021 on grsentiers.org, the official website of the Walloon GR organisation; always consult their website to be informed about the most recent situation)

Nessonvaux is a small train station on the line Liège - Verviers - Welkenraedt - Eupen. Take the L-train Liège - Verviers to get there. The trip from Liège doesn't take 20 minutes, from Verviers it's even shorter.

We walked through the southern outskirts of Verviers up to the N672 (Verviers - Jalhay). A bus stop there will take you to Verviers Gare Centrale. Keep in mind that there are only a few busses servicing this place. When we arrived we still had to wait more than one hour for the bus. So we decided to hitch-hike and almost immediately got a ride to the centre of Verviers.
If you're not that lucky, simply follow the N672 one kilometre on foot in the direction of Verviers. In the centre of Mangombroux you'll find several busses that will bring you to the centre and the train station of Verviers.
You can also leave the GR 573 trail earlier and follow the connecting trail to the centre of Vierviers (see on the map).

(Check this info always with the websites and apps of the public transport companies - NMBS, De Lijn, Tec... Their schedules change regularly and differ as to the moment of the trip: weekdays, weekend, holiday, peak hour...)

Apart from the populated areas around and in Pepinster and Verviers, this is essentially a nature walk. Most of the time the hike follows the Vesdre valley along unpaved paths. On the valley slopes stretches of deciduous forest and pine wood alternate with more open landscapes. This often results in nice views over the valley where amongst the greenery always lurk a few houses and small hamlets / villages. The railway track also shows itself from time to time, or you know it's there when suddenly you see a train glide through the landscape, or when you hear the whistle of a train that enters one of the many railroad tunnels.

We're more than halfway when arriving at Pepinster. This is where the Hoëgne river ends up in the Vesdre river. You'll get to see the Hoëgne a lot more later along the GR 573 trail. Pepinster itself is not what one would call an interesting tourist destination. But there's a train station if you already want to end the hike, and there are some supermarkets, bakeries, pubs and restaurants if you're hungry and/or thirsty.

Having left Pepinster you'll soon approach Verviers. That's when we noticed a GR sign indicating a connecting trail to the centre of Verviers.

We don't give in to the temptation to try the connecting trail, and stick to the main trail. It passes through the southern outskirts of Verviers. This surely is not the most interesting part of the hike. Where we reach the N672 traffic road there is a bus stop. We had planned to take the bus there to the train station in Verviers, but we got there way too early. The bus would only arrive more than an hour later. Given that the place of the bus stop is of no interest at all, we decided to hitch-hike to Verviers. We were lucky. A local picked us up, admitting that the bus frequency in this area is way too low to make it a viable alternative for the individual cars. We couldn't agree more...

Verviers itself is quite an interesting place. The city is working hard to get rid of its negative reputation as a dull, dirty and neglected industrial wasteland. As in many other places in Wallonia you can see the efforts that are being made to build, re-arrange and renovate. The glorious 19th century industrial past as a world-famous textile centre is gone forever, but at least some of that past should remain visible in a decent way, not as decrepit ruins. There are quite some green spots in the city, and what especially impressed us is that car drivers stop when you arrive at a pedestrian crossing. In Antwerp we risk our lives if we dare do that... Who said that Walloon car drivers are worse than the Flemish ones? We're getting the impression that it's just the opposite. Anyway, despite all the efforts, Verviers still has a long way to go.