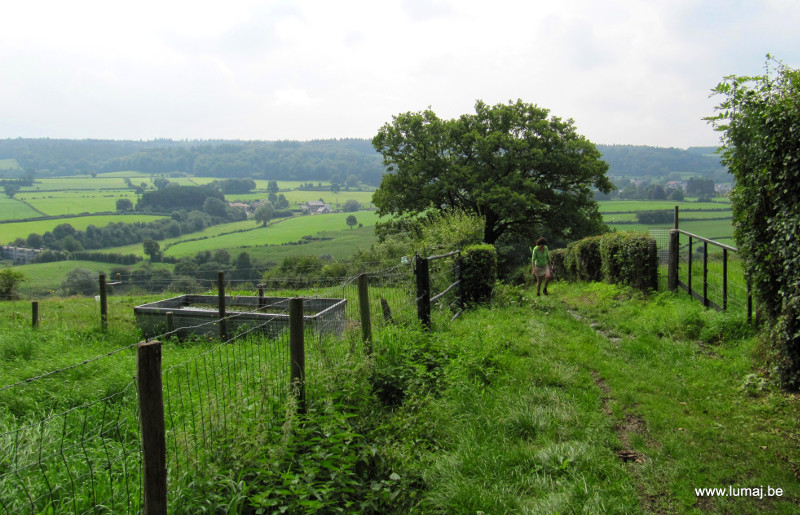 From French-speaking to German-speaking Belgium in a green and varied landscape. Don't forget to visit the historic place Limbourg, and enjoy walking in the green meadows with the stiles in the second half of the hike.
The cosy little town Eupen is the ideal place to finish this hike. 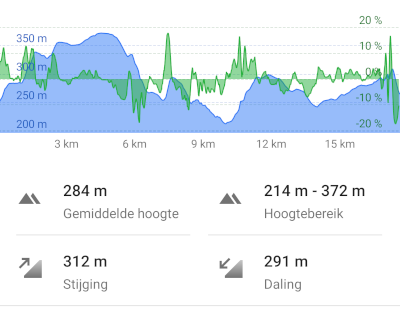 (This track presents the trail as it was shown in January 2021 on grsentiers.org, the official website of the Walloon GR-organisation; always consult that website to be informed of the latest situation)

We left the day before (by train) to Eupen and set up our tent on Camping Herzogenwald for 2 nights (if you want some more comfort, there is a youth hostel in Eupen).
The next morning, with only a day pack, we took the bus in front of the camping (direction Verviers, not on Sundays). Some 40 minutes later we arrived at Verviers Gare Centrale. There we took bus 390 (to Rocherath) and 10 minutes later we were at the bus stop Mangombroux Sècheval, where the hike starts.
If you want to make this a day trip, just take the train to Verviers Gare Centrale (on the line Brussels - Liège - Welkenraedt - Eupen) and then the bus to Rocherath.

The hike ends in Eupen-Haas (the lower city) where the GR 573 and GR 15 trails separate. We only had to follow the GR 15 signs during another 1.8 km to get to the camping site.

If you still return home, you can walk from the finish of the hike to the train station of Eupen. You can also take a bus from Eupen-Haas to get to the train station or the Bushof (at 400 m from the station). The train ride between Eupen and Verviers takes some 20 minutes, and you have another station to station hike.

(Always check this info with the websites and apps of the public transport companies involved - NMBS, De Lijn, Tec... Their schedules change regularly and differ according to the moment: weekday, weekend, holiday, peak hour...)

We repeated this GR 573 hike Verviers - Eupen in March 2018, but in the opposite direction. It is still an interesting and nice hike, but in a different season and in the opposite direction it results in new views along the trail.
The itinerary is still the same as it was in 2014. So, we don't have to add anything to the description of the hike.
But that doesn't mean you can't enjoy the new pictures.

Once the hike started, the urban quarters of Verviers quickly disappear. As opposed to the two previous hikes on the GR 573 path, this one isn't just limited to the slopes of the Vesdre valley. We now also get to discover the broader region around the valley. The landscape varies between stretches of wood and meadows surrounded by hedges, giving nice wide open views over the landscape.
The first part of the hike leads us through a mainly forested area. Upon leaving these woods we're approaching Hèvremont. As the hike progresses, the wide variety of unhardened paths strikes us. Broad field and forest tracks, then again ascending (or descending) rocky paths, muddy ways or grass paths.
Just before Hèvremont the GR signs point us to a meadow. Some heifers in the distance follow our careful steps between their cow-pats, but soon their attention is drawn back to the grass which looks so much more interesting than two humans. It takes some searching to spot a hedge-gate on the other side of the meadow, but once we found it, we enter the village. It's only a short stroll to the church, but apart from some older houses and the crosses we start to notice, Hèvremont is not really the place where we would spend lots of time.

A rocky path (Voie d'Amis - Friends Path) makes us climb a long slope up to the hamlet of Halloux. Then the trail brings us just underneath the walls of the once fortified town of Limbourg. GR 573 doesn't visit the place, but we certainly wouldn't want to miss the opportunity to take a good look into the town that was declared 'exceptional cultural heritage' of the Walloon Region. The downtown part of Limbourg, called Dolhain, is situated along the Vesdre river. The upper part (Limbourg itself) is situated on a hilltop and was a fortification ('bourg') already in the 10th century. Due to its strategic positioning, Limbourg dominated the region until the 17th century. The Belgian and the Dutch provinces Limburg owe their names to this place in Wallonia.

The fortifications have long since disappeared. It was the French Louis XIV who ordered their destruction. A fire in 1834 completed the destructions. What can be seen today dates from the 18th, 19th and 20th centuries, but the ground plan, and particularly the paving are still authentic. The church goes back to the 15th century, and the linden tree in front of the church is 300 years old. The paving on the square is made of stones from the Vesdre river. It's not really a smooth surface to walk on, but it certainly is strong and made to last for centuries.
An interesting detail: Dolhain (the lower town) is translated in Flemish as Dalhem. But Dalhem is also the name of a Walloon village situated between Maastricht and Visé (Wezet). That Dalhem is translated in Flemish as 's Gravendal. Confusing? Why not simply use the local names everywhere? That would reduce the huge administrative cost of all those translations and different signboards in Flanders and Wallonia. And it would make Belgium look less ridiculous to foreigners passing through our country...

After the historic visit the trail continues to Goé (translated as Gulke, or sometimes Geuleke), a village that always was, and still is, part of Limbourg. We cross the Vesdre, again take some altitude, and then walk towards Membach through a green landscape of meadows. The German-sounding name made us think that by now we had arrived in the German-speaking part of Belgium, but that was wrong. Membach is part of Baelen and that community is still situated in Wallonia. It's only when we leave Membach and enter the territory of Eupen, that we arrive in the German-speaking part (nowadays it's called more and more East Belgium). The border between Baelen and Eupen used to be a country border between 1820 and 1920. It was the border between Prussia (Germany) and the Netherlands (later Belgium). The old border poles are still there.

Having left Membach, we again walk from meadow to meadow, passing stiles in the form of gates, and finally arrive at a path crossing, where one path could lead us to the camping site, some 500 meters further, down in the Weser valley (Weser is the German name of the Vesdre). However, the pub at the camping is closed on Mondays, so we prefer to continue the hike to Eupen. After all, we have to eat something and buy some food for the next day.

Anyway, continuing the hike into Eupen is not a punishment. The small town is the capital of the German Community, and besides being an administrative and commercial centre, it's also a popular tourist base for the region (amongst others the High Fens, where the trail will lead us tomorrow).
But, is there a difference between the German-speaking Community (East Belgium) and the East Cantons, or do these names all refer to the same region? Well, there is a difference. The East Cantons are bigger than the German-speaking Community. They also encompass the French-speaking communities Malmedy and Waimes. The East Cantons used to be German territory until the end of World War I. In all the communities of the German-speaking Community, the French-speaking locals as a minority, enjoy language facilities. In the two French-speaking communities of the East Cantons (Malmedy and Waimes), it's just the opposite, there the German-speaking locals enjoy language facilities.
In World War II Hitler annexed the East Cantons back to Germany. As a consequence 8000 East Belgians were forced to join the German army. 2000 of them were killed on the East Front (Russia). And after the war, when the territory again became Belgium, many of the survivors were seen as collaborators, although it was not their fault that they had become Germans...
Fortunately, those terrible times are over and the bad memories have almost faded. We end the hike with a last crossing of the Weser, the river we've been following since we started the GR 573 trail in Angleur. The next hike we'll discover a different river: the Hill (La Helle in French).